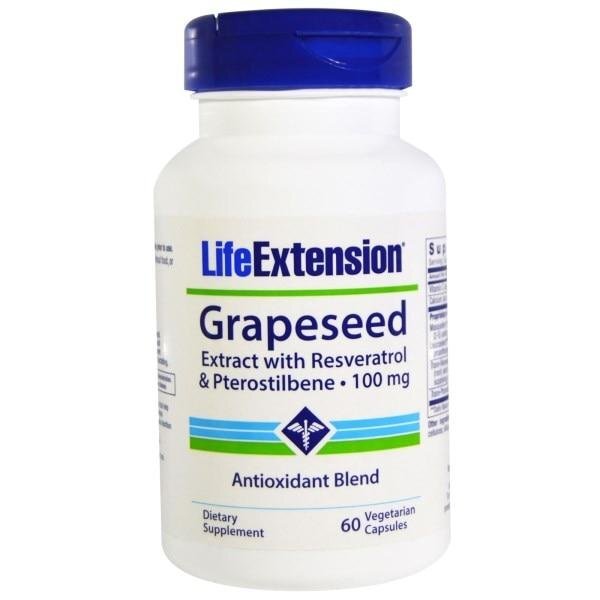 The Grapeseed Extract with Resveratrol & Pterostilbene formula provides a blend of standardized proanthocyanidins found in grapeseed and skins. Grapeseed extract helps to maintain healthy platelet function and other aspects of platelet responses, and protects the central nervous system from reactive oxygen species. This whole grape extract contains a spectrum of polyphenols that are naturally contained in red wine such as proanthocyanidins, anthocyanins, flavonoids, etc. This blend also provides standardized trans-resveratrol, the polyphenol in red wine that has shown so many health benefits… and trans-pterostilbene, which researchers have found works synergistically with resveratrol to activate one's ”longevity genes.”

Like resveratrol, pterostilbene belongs to a class of compounds called phytoalexins, which are naturally produced by plants when under attack by pathogens such as bacteria or fungi.

Findings from published scientific literature indicate that resveratrol may be the most effective compound for maintaining optimal health and promoting longevity.

Research funded by the Life Extension Foundation showed that a combination of low-dose (20 mg) resveratrol plus grapeseed extract mimicked many of the favorable gene expression changes seen in calorie-restricted animals.

Read the entire label and follow the directions carefully prior to use.

Take one (1) capsule daily with or without food, or as recommended by a healthcare practitioner.